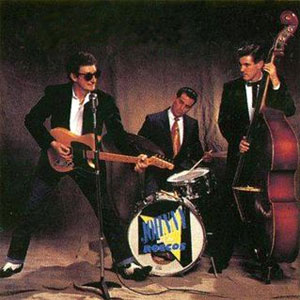 British Rockabilly group, originally formed in the early '70s, Johnny & the Roccos were from the original wave of rock & roll revivalists (predating the early-'80s movement led by the Stray Cats by nearly a decade), and are perhaps the only revivalist act to ever emerge from Scotland. Longtime leader Bob Fish has been with the band from the beginning, and although they've been issuing albums since the decade they formed (usually as limited edition pressings), it's the group's live show that has always been their main attraction. In addition to their own music, Johnny & the Roccos have also backed many renowned old-time U.S. rock & rollers when they tour Europe, including Billy Lee Riley, Sonny Fisher, Eddie Fontaine, Buddy Knox, and Ray Campi. Although they've released numerous albums over the years (including such titles as Shakin' All Over, Scots on the Rocks, Good Rockin' Tonight, Tearin' Up the Border, Stompin', Rock n' Roll Call, Up the Country, Feel Like Rockin', Great Scots!, and Captured Live at the Rattlesnake Saloon), the only one that remains in print is the 1997 compilation Bop a Dee Bop a Doo.