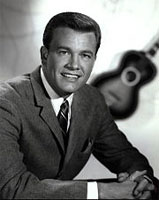 Millions of Americans know Winston Conrad as game show host Wink Martindale. Few know that he once waxed a record, "Deck of Cards," that reached the number seven position on Billboard's Top 100 pop chart in November 1959. Martindale was born in Belle, TN, on December 4, 1934. As a teenager he realized his gift of gab, and school friends gave him the moniker Wink. He worked as a radio announcer before hosting Teenage Dance Party in Los Angeles on KHJ-TV in 1959. Randy Wood, the head of Dot Records, spotted Martindale's potential, booked studio time, and cut "Deck of Cards." The spoken word recording was a remake of a Texas T. Tyler's record that went to number 21 pop in 1948. Previously, Martindale recorded for OJ Records in 1954, so this was not his first time in the studio. Dot tried to follow the hit with other recordings but all failed; the most successful was his cover of Frankie Miller's "Black Land Farmer," which bottomed out at number 85 on the charts. While his recording career went south, Martindale became a fixture on daytime television. Since 1978 he has hosted Tic Tac Dough, Last Word, and Debt, among others.