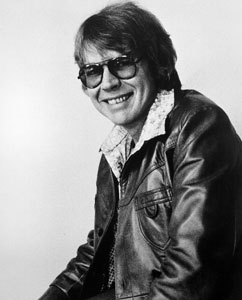 Essentially a character created by advertising executive William Fries, C.W. McCall was the instrumental figure behind the truck-driving craze that swept America in the mid-'70s. Fries was born November 15, 1928, in Audubon, IA, and while he displayed musical promise as a child, he was more interested in graphic design. While attending the University of Iowa, Fries studied music and played in the school's concert band, but his major was in fine arts, and after graduation he began handling the art chores at an Omaha, NE, television station. After five years there, he was hosting his own program, on which he drew caricatures of celebrities.
Fries signed on as the art director for an Omaha advertising agency in the early '60s, and it was there that he created the character C.W. McCall as a selling tool for an area bakery. A trucker for the fictional Old Home Bread company who spent much of his time in a diner called The Old Home Filler-Up-an'-Keep-On-a-Truckin' Cafe, the McCall character was a huge hit with viewers, and the radio campaign won Fries the advertising industry's prestigious Clio Award. In 1974, Fries decided to cut a record under the McCall moniker, and the single, a monologue with country backing titled after the aforementioned cafe, was a Top 20 hit. A follow-up, "Wolf Creek Pass," was even more successful.
In 1975, McCall released the album Black Bear Road; the single "Convoy" hit number one on both the pop and country charts, and a national craze was born. The song proved so successful that it influenced the famed filmmaker Sam Peckinpah to direct the 1978 film Convoy, starring Kris Kristofferson. By the time of the film's release, however, McCall's career was largely over. He released two more LPs, 1975's Wolf Creek Pass and 1977's Roses for Mama, which did spawn a major hit in its title track. But shortly after the latter album's release, McCall turned his back on the music industry to focus on the burgeoning environmental movement and moved to the small town of Ouray, CO, of which he was elected mayor in 1982. An attempt at a comeback in 1990 proved unsuccessful.