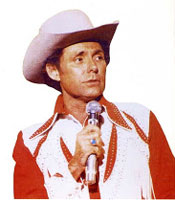 Born 21 April 1941, Robards, Kentucky, USA. When he was eight years old, Owen saw Hank Williams sing and from that time he became completely fascinated by the star and his music. After completing his education, he worked variously as a journalist and as a golf coach until 1969 when, with Mel Tillis’ help, he relocated to Nashville to work as a songwriter. Over the next few years, several artists had chart hits with his songs. These included ‘Too Lonely Too Long’ and ‘One More Drink’ (both Mel Tillis), ‘Little Boy’s Prayer’ (Porter Wagoner), ‘Sweet Baby On My Mind’ (June Stearns), ‘Southern Loving’ and ‘Broad Minded Man’ (both Jim Ed Brown), ‘The Telephone’ (Jerry Reed) and arguably the best-known of all, ‘Louisiana Woman, Mississippi Man’ (Conway Twitty and Loretta Lynn). He never lost his obsession with Hank Williams and encouraged by his wife, who once dreamed that she saw Owen onstage at the Grand Ole Opry but that it was Williams’ voice that she heard coming from him, he began to recreate his idol. He talked with people that had known or worked with Williams and practised his mannerisms and stage presentation. In 1976, he presented Hank, a one-hour PBS television special that won him an Emmy award for the best show of the year on public television. He then produced a 90-minute one-man live stage show, An Evening With Hank Williams, which had backing tracks provided by Hank’s band, the Drifting Cowboys. He commenced touring extensively with the show and regularly drew audiences of thousands at countless venues. He also starred in the 1980 film Hank Williams:The Man And His Music, for which he received an Emmy nomination. In 1978, his Epic recording of ‘Lovesick Blues’, recorded with the Drifting Cowboys, was a minor chart hit and in the early 80s, he scored two more minor hits with ‘Ten Anniversary Presents’ and ‘Hell Yes, I Cheated’. In 1985, he wrote and produced a 10-hour Hank Williams radio show which, on New Year’s Day, was broadcast on various US stations as a tribute. Owen has also appeared as Williams for the notedLegends In Concert at the Imperial Palace, Las Vegas, and made many appearances on theOpry, including a special one on 1 January 1993, the 40th anniversary of Williams’ death, which gained him a standing ovation. He continued to tour into the 90s, still writes songs and, at times, works as an auctioneer near his Henderson, Tennessee home. He is also noted for his collection of classic cars.
Jim Owen passed away on March 7, 2020.