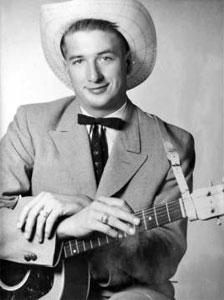 A longtime figure on the Texas country music scene, Charlie Phillips hailed from the West Texas community of Farwell, not far from the Texas/New Mexico border. Phillips grew up in a farm family, but developed a keen interest in music as a boy, and was known to sing songs he'd written while plowing the fields. As a teenager, he developed enough confidence in his work to travel to Clovis, NM and play some of his tunes for producer Norman Petty, who had recorded hits for Buddy Holly and Buddy Knox. Petty was impressed with Phillips, and arranged for him to record some of his material; Buddy Holly played guitar and sang backup on some of Phillips' first sessions in Clovis, including a tune called "Sugartime." Petty brokered a record deal for Phillips with Coral Records, and "Sugartime" was the B-side of his debut single, "One Faded Rose," released in 1957. The record fared well on the country charts, and Coral placed the song "Sugartime" with another one of their acts, the McGuire Sisters, whose cover became a major pop hit and helped turn "Sugartime" into an oft-recorded standard. While Phillips' next single for Coral, "Be My Bride," enjoyed a successful run on the country charts, his next several releases, recorded in New York City, attracted little notice, and after his contract ran out with the label, he returned to Clovis and cut more sessions with Norman Petty. Columbia Records signed Phillips, and his first single for his new label, "I Guess I'll Never Learn," returned him to the upper reaches of the country charts. Phillips' next few sessions for Columbia were recorded in Nashville and fared well, though he grew dissatisfied with the quality of material his A&R men assigned to him; Phillips sang on the original publishing demo of "Welcome to My World," but Columbia felt it was a poor match for him and wouldn't allow him to record it for release, while Jim Reeves' later version became a smash. After leaving Columbia, Phillips cut a single for the Texas-based Longhorn Records label, "The Big Ball Is in Cowtown," which became a major regional hit; the record's success attracted the attention of producer Jimmy Bowen, who signed Phillips to a deal with Reprise Records. Phillips' Reprise debut, "Souvenirs of Sorrow," was climbing the charts when Reprise decided to get out of the country field, apparently on the orders of label founder Frank Sinatra, and they promptly dropped Phillips and deleted the record from their catalog. By this time, Phillips was enjoying a profitable sideline as a country radio DJ and owner of several radio stations, and rather than deal with the frustrations of the record game, he eased back on performing and put his emphasis on his radio career. In the '80s, Phillips teamed up with Norman Petty to record a new album, but Petty's death in 1984 halted the project before it could be completed, though the final Petty sessions eventually surfaced on an album called Full Circle. Phillips continued to perform in Texas in his spare time with a Western Swing band called Charlie Phillips & the Sugartimers. In 2011, the prestigious German reissue label Bear Family Records issued Sugartime, a collection of Phillips' singles of the '50s and ‘60s.