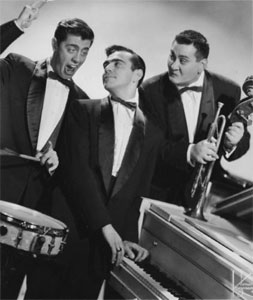 The Playmates — best known for "Beep Beep," one of several Top 40 hits — were one of the first rock & roll groups signed to the New York-based Roulette Records, formed and co-owned by music industry leaders Morris Levy, Joe Kolsky, and George Goldner. Originally known as the Nitwits (probably a better name for them in the long run), the Playmates had been performing in the area around Waterbury, CT, for five years before signing to Roulette in 1958. The label had already scored a few rock & roll hits by the time they signed the group; unfortunately, the Playmates' specialty was not rock & roll, but novelty music.
Despite the oft-corny lyrical content of their upbeat pop fare, they earned two hits right away with "Jo Ann" and "Beep Beep," the latter with a chorus that featured the group repeating a phrase of car beeps ("beep beep, beep beep, this car goes beep, beep beep"). Despite its silliness, "Beep Beep" — written by group members Carl Cicchetti and Donald Claps — climbed to number four in the nation in December 1958 and earned the Playmates the right to record an album, At Play With the Playmates, which followed soon after.
In 1959, they scored again with "What Is Love?" (number 15) and followed suit the next year with "Wait for Me" (number 37). The group subsequently recorded three additional albums for the label: Cuttin' Capers, Wait for Me, and Broadway Showstoppers. Another album, The Playmates Visit West of the Indies, was issued on an early- to mid-'60s budget reissue label called Forum Records, which was a division of Roulette Records. The group disbanded in 1964.