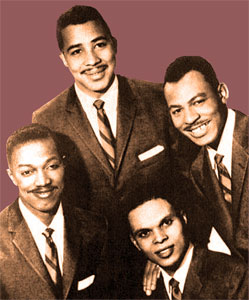 The careers of Englewood, NJ, natives Homer Dunn, Andy Jones, Ronald Allen, and Charles Cook hadn't reached first base when they met manager of a group named the Avons, who christened them the Four Arts because they favored pop songs. After Warren Lanier rediscovered the quartet, he renamed them the El Rivieras, though they remained unrecorded until Jones met William Fix, the manager of the Ames Brothers. Fix arranged an audition with Marvin Cane and George Paxton, the owners of Coed Records, and the El Rivieras were off and running. They dropped the "El," and debuted as the Rivieras with "I Count Every Star," which entered the pop charts at number 73 in 1958.
Good management kept them working, taking them as far west as Chicago. Their biggest hit, "Moonlight Serenade," reached number 47 in 1959. "Our Love" generated no action, but their fourth release, "Since I Made You Cry," dented the pop charts at number 93 in 1960. Four subsequent releases -- "Moonlight Cocktails," "My Friend," "Stay in My Heart," and "El Dorado" -- went unnoticed. However, "Moonlight Cocktails" along with "Moonlight Serenade" became popular selections on beach-music compilation albums. Coed released two LPs by the group, My Silent Love and Scarlet Hour, but after the label folded in 1961, the Rivieras soon faded into the moonlight. In 1992, Relic released the compilation Moonlight Cocktails on CD.