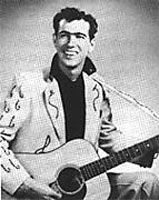 Ray Smith was a rockabilly and country singer who recorded for the legendary Sun Records label, and is best remembered for his 1958 hit "Rockin' Little Angel." Smith was born on October 31, 1938 in Melber, KY, where his father supported his family as a sharecropper and sheet metal worker. Smith was a self-taught musician who didn't begin performing in public until he joined the Air Force in 1952, after driving a Coca-Cola truck, operating an oven for a commercial baker, working in a shoe factory, and brewing moonshine with his brother-in-law. Smith was recruited to perform in a talent show while in basic training in Syracuse, NY; after winning first prize for his rendition of Hank Williams' "Lovesick Blues," Smith began teaching himself to play the piano, guitar, and harmonica. While stationed in California, he began playing club dates on weekends, and in 1956 he formed his band "The Rock & Roll Boys," featuring Raymond Jones on guitar, Dean Perkins on steel guitar, James Webb on bass, and rhythm guitar, and Henry Stevens on drums. The band began playing clubs in Kentucky and Illinois, and in 1956 Ray Smith & the Rock & Roll Boys landed their own local television show on a station in Paducah, KY. The show caught the attention of manager Charlie Terrell, who signed Smith as a client and got him a deal with Sun Records. Judd Phillips, brother of label founder Sam Phillips, produced Smith's sessions and gave his material a bit more polish than much of the classic Sun material, but Smith was a strong singer with a solid band, and his fourth single, 1959's "Rockin' Little Angel" -- a revved-up rewrite of the folk chestnut "Buffalo Gals" -- became a major hit. (While his first three singles were issued on Sun, "Rockin' Little Angel" appeared on the subsidiary label Judd, as did most of his subsequent releases for the Phillips Brothers.) Smith followed his uptempo hit with a handful of ballads that failed to make a serious impression on the charts, but Smith continued to perform and record as a journeyman rock & roll and country act, cutting material for Vee-Jay, Warner Brothers, Smash, Tollie, Vix and Cinnamon Records over the next decade-and-a-half. In the '70s, Smith relocated to Canada and continued to perform regularly there, as well as landing frequent dates in Las Vegas. Smith's career came to an abrupt and tragic end on November 29, 1979, when the musician unexpectedly took his own life.