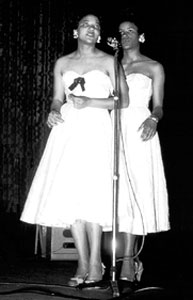 "Eddie My Love," a sweet ballad by the Teen Queens, clawed its way to number 14 on the pop charts on March 31, 1956. This occurred despite pop covers by the Chordettes, and the Fontaine Sisters -- all three cracked the pop Top 20 the same year. The Teen Queens were Betty and Rosie Collins, sisters of Aaron Collins, who sang with the Cadets and the Jacks. The Jacks successfully covered the Feathers' "Why Don't You Write Me," in 1955; as the Cadets they covered the Jayhawks' "Stranded in the Jungle." So perhaps the Teen Queens' cover problem was musical payback. The songwriter credits are attributed to Aaron Collins, Maxwell Davis (arranger), and Sam Ling; Ling was a pseudonym for Modern/RPM/Flair Records' owner the Bihari Brothers. Assuredly the writers enjoyed the cover versions, all the airplay meant more Broadcast Music Incorporated (BMI) performance money, and the covers meant more mechanical income for the writers.
RPM Records followed the hit with "Baby Mine" which didn't do as well. Nor did "Billy Boy," "Red Top," "Rock Everybody," or "I Miss You." By 1958 they left RPM to sign a one record deal with RCA Records, who released the unsuccessful "Dear Tommy." The Teen Queens' contract with Antler Records yielded two singles: "There Is Nothing on Your Mind," an answer to "There's Something on Your Mind," and "I Heard Violins," which became the flop that broke the camel's back. In 1961, the Teen Queens called it quits, and never recorded again.